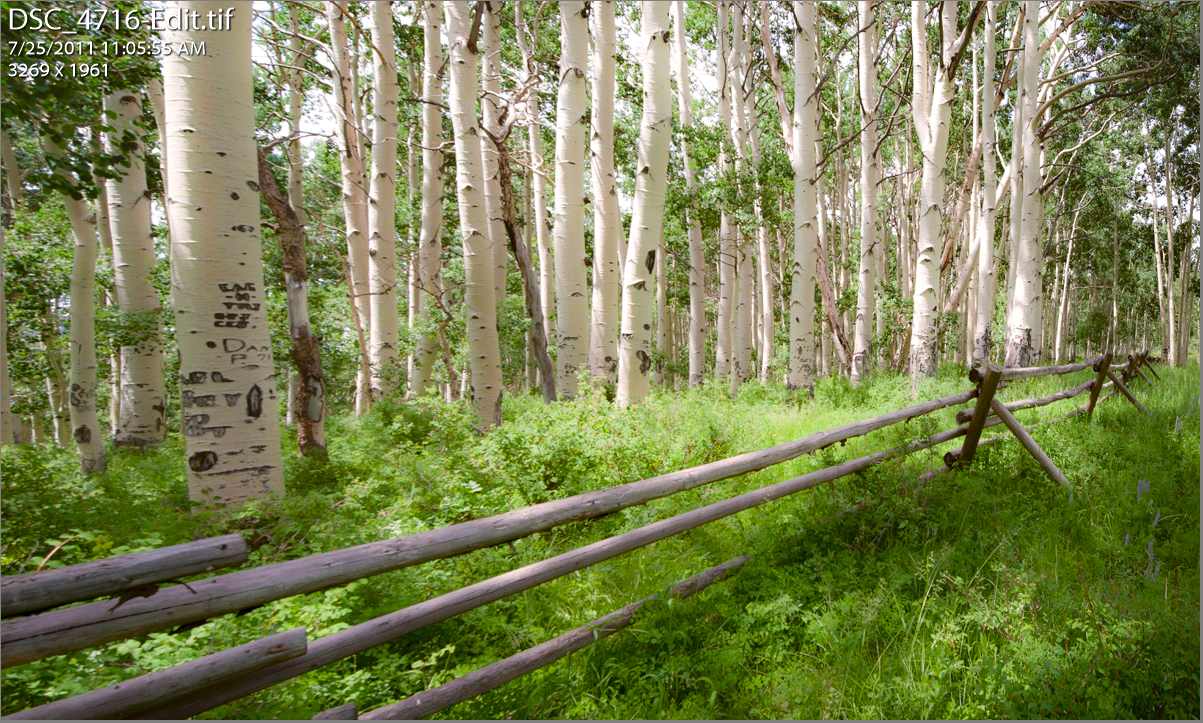 The ability to change the perspective of an image is a powerful feature of image editing software like Adobe Lightroom or Photoshop. Many photographers use the vertical perspective transformation for making converging lines become parallel, correcting the distortion that appears when the camera is pointed upward at a building. But this type of perspective transformation can also be used to add convergence or even recover the visualization you were unable to achieve in the field. In this lesson, I will describe how to alter the perspective to get a more emotive angle on a trailing fence — an effect I visualized in the field but couldn’t achieve because a large log pile blocked the ideal location for capturing the image. The result of the transformation is not exactly what I visualized but is closer to the ideal than my raw image.

The image above, shows an old fence and glade of aspen trees in the high mountains of Utah. This scene was captured in July 2011 using a Nikon D700 and 16mm lens at f/8. I visualized an exaggerated convergence of the fence along the line of sight, with a nearby aspen anchoring the foreground and converging fence lines creating a deep penetration into the forest. Doing this required getting close to both the fence and a foreground tree. Unfortunately, a log pile made it impossible to reach this location. However, I was able to recover some of my original visualization using the Develop > Transform > Horizontal editing tool in Lightroom.

To begin, let’s look at the raw image. Getting as close as possible to the fence, the camera was still too far to record what I visualized in this scene. There are two problems: 1) There is too much empty space on the left end, and 2) The low fence angle creates a static image. These shortcomings are both improved by using a horizontal perspective transformation and cropping.

Simply cropping the raw image gives the result below. This solves the first problem by ridding the image of dead space on the left and right. But the problem remains of low fence angle and a static perspective.

In Adobe Lightroom, the Transform > Horizontal tool in the Develop module allows me to effectively “rotate” the image plane horizontally, around an imaginary vertical axis, and this increases the fence angle to something closer to my original visualization. The following screenshot shows this horizontal transformation along with the crop rectangle used to produce the final image. Notice that this trick isn’t without a downside: a loss of resolution as about 40% the pixels in the raw image are discarded by the transformation. In the following image, these discarded pixels are dimmed, outside the crop box:

Obviously, no amount of  clever editing can recover what is missing from the raw image. By applying a horizontal perspective transformation, I have recovered something close to my original visualization — at the expense of reducing a 12-megapixel image to around 7 megapixels. Although the megapixel count alone does not make a successful image, this does limit the size of print made from it. Here again is the final image: